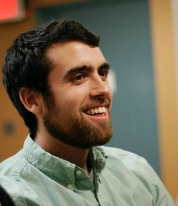 Justin Farrell, a doctoral candidate in Notre Dame’s Department of Sociology, is interested in how human values, morality, and religion impact our responses to environmental problems.

“I focus on how this dramatic social change influences—and is influenced by—different answers to the moral question: What is nature good for?”

Farrell brought a similar focus to the 2010 BP oil spill in a recent study for which he won the American Sociological Association (ASA) 2012 Marvin E. Olsen Award for best graduate student paper on environment and technology.

He explored how the largest human-caused disaster in the United States prompted a nationwide "moral shock" that led some people, but not others, to respond with environmental engagement.

Farrell says he wants to better understand “the characteristics of Americans who did respond and draw conclusions about what this means for civic engagement, politics, and responses to environmental catastrophe.”

The only sociology student in the nation to win an EPA STAR Fellowship this year, Farrell takes an interdisciplinary approach to his research, combining concepts of philosophy and the sociology of religion with quantitative strategies using "big data" and traditional qualitative fieldwork.

It is work inspired by his own life experiences.

“I'm originally from Wyoming, and the rest of my extended family lives in Idaho, so we would spend a lot of time out in those parts visiting family. I was exposed to environmental conflict at a young age, and growing up I became curious about the cultural differences beneath different conflicts.

“It’s a mix of personal and professional interests. As some sociologists like to say about the discipline, sociology is the ‘study of me.’ This is indeed true in my case.”

Farrell will next continue his research at Yale University, where he has accepted a job as an assistant professor of sociology in the School of Forestry and Environmental Studies, with a joint appointment in the Department of Sociology.

Reflecting on the his recent honors, Farrell credits his faculty mentors in Notre Dame’s Department of Sociology.

“To see the fruits of hard work is very rewarding,” he says, “but these awards should be given to my mentors because of the amount of time and patience they’ve given me as I work through my ideas—not to mention all the time they spend editing and helping me with revisions.

“I knew that coming to Notre Dame would provide me with wonderful mentors but underestimated how great they would actually be,” he says. “My mentors have always made time to critically read my work, talk about professional development, and help me navigate the choppy waters of academic life.”

Farrell also credits his development as a scholar to the larger intellectual community fostered in the department. “There is latitude from the faculty to pursue varied interests within our traditional strengths of religion, social movements, and education,” he says.

“I honestly cannot say enough good things about the Department of Sociology at Notre Dame. There is a lot of energy about where the program is headed and generous support from the graduate school to do everything to make it a premier place to conduct ground-breaking sociological research.”

Originally published by Aaron Smith at sociology.nd.edu on April 01, 2013.